Cover of the Week 47 Thirteen 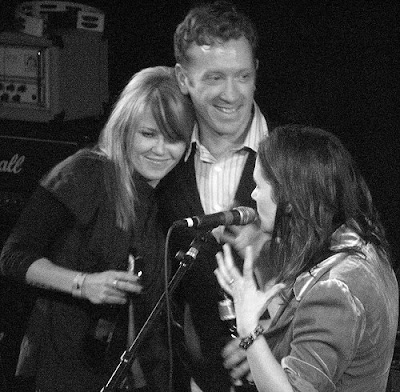 Kay Hanley and Lori McKenna at Hot Stove Cool Music, January 2008, with me grinning appropriately for a part time man of rock. One of my favorite pictures. Oh yeah, please let me know who took it, so that I may give credit.

I am not yet convinced that Twitter is worth the hype. But it did facilitate this week’s CoTW. More specifically, it led to me asking my friend and fellow Hot Stovie, Kay Hanley, to please sing on this rendition of one of the most beautiful songs in pop music history, Big Star’s “Thirteen.”
[In the early 2000s, I wrote about the song for allmusic.com; dig the dated reference to CD repeat buttons].

It’s a drop-dead song and should be up there with “Yesterday” for most-covered pop songs. There have been a few notable versions, to be sure. And the world does not need mine. But I don’t care. I don’t even want to mess with it. I just want to sing and play it. So that’s what I do here. But I do get the honor of having Kay sing with me. And what an unbelievably lovely voice she has.

Last week, I received a package from Amazon with the new Big Star box set, Keep an Eye on the Sky. I had not ordered it. I had no birthday recently. I could only think of one person that would send such an unexpected and unwarranted gift: Mike O’Malley. (See Mike’s most recent turn at the end of this clip from the TV show, “Glee”):

Making friends relatively later in life is a rare treat and accomplishment. Rarer still is to form a bond with someone you start to count as one of your all-time best buds. But then again, it is rare to meet someone as big-hearted as Mike. He has this effect on almost everyone. By way of example, a friend of his told a story about this huge effort Mike made to be part of a personal event in the friend’s life (those details do not matter here). The friend vowed to pay it back to Mike. And, semi-whimsically, the friend decided to throw a surprise party for Mike, just as a “Thanks for being you” kind of fete. He started calling mutual friends. In a matter of a few days, people were canceling plans, booking flights back to L.A., finding babysitters on late notice, and offering homes in the Hollywood Hills, and to host. A bunch of actors showed up to read from one of Mike’s plays (not many folks know Mike is an accomplished dramatist). He was gobsmacked. But he shouldn’t have been; he has laid out enough good karma to pave his way to Nirvana no matter how he acts from here on out.

And I am a lucky guy to make such friends. I have mentioned many others here in this blog, people who have come along well after my mid-30s. I count this as perhaps the greatest benefits of my time in Buffalo Tom. We clearly reached many people, so it is almost like we have a head start in a relationship once we actually make acquaintances. Can you imagine what it is like to be a demigod like Dylan or McCartney walking the earth, doing good works? Only that we could touch the hem of their garments!

I guess I turned Mike on to this song years back, so he sent me the CD set. And so here I am this week, with the live version of the song in my head all week. The live version, by the way, is more acutely heart-wrenching somehow, with Chris Bell out of the group, and the strain of Chilton’s vocals over the chatter of a small nightclub crowd. And with the song running through my brain, I look at one of my various screens and there is a “tweet” from Kay with the lines, “Won’t you tell me what you’re thinking of/Would you be an outlaw for my love.” I’m all like, BAM, yo! I’ll tell you what’s on my mind, Kay! That song, that song! And you singing on it! And your hubby, USA Mike Eisenstein, playing the solo!

It was meant to be. Kay said yes, thank God. And the glory of technology, which offered its first glimmer of inspiration with that message on Twitter, continued to ratchet up with the sending-and-receiving-and-back-again of digital music files and home studio recordings. In a matter of two days, my humble dude-in-basement recording was brought to life by the sunny Cali (but melancholy in the Brian Wilson way) sounds of Boston ex-pats, my buddies, Kay and USA. Talk about your pros. Yikes!

Kay and Mike were mere kids when I first met them. And though we were also young, BT were starting to develop facial hair, at least, by then. But it was not until my involvement in the Hot Stove event, around 2001, that I got to know them well. I remember days around 1999 or 2000 on an Arlington (Massachusetts) playground with my then-baby daughter, playing Mr. Mom hanging out with Kay, Tanya Donelly, and our friend Kristen Hughes, all of us with out kids. Kay’s and Tanya’s daughters were born right around the same month as mine. We might still have a budding rock band or girl group.

Anyway, we miss you Kay and Mike and all the other friends who made the smart move for sun and work in L.A. Keep up the good vibrations!