Home > CoTW > Cover of the Week 78 Everything Flows

Cover of the Week 78 Everything Flows 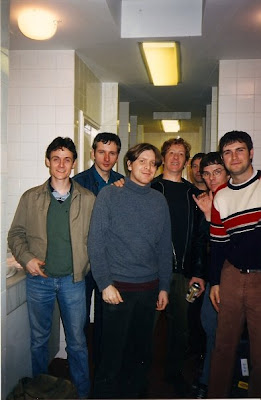 Around 1995-96, we hooked up with TFC for a double headline tour of Scandinavia, Germany, and Spain. This picture is taken in Barcelona or Madrid at the end of that tour. My wife, Laura, had come to join us at the end of the tour for a holiday we would take after the wrap, something we often did before the first kid arrived. She probably took this photo.

After the last show, we spent a day in Madrid and then bid adieu to the rest of the Buffalos and took a train back to Barcelona for our vacation. We got in around dinner and after checking into our very nice hotel, went out and enjoyed a great late night Spanish meal, followed by some glasses of port and went back to the hotel. We got there just after the stroke of midnight marked Laura’s birthday. The next day was to be sightseeing and the real birthday celebration dinner.

Sometime during the wee hours of the morning, I woke up to hear a crash in the bathroom. I went in and found that La had fainted, something she had done once or twice in the past. It seems that waking up in the middle of the night, plus the jet lag and port (something she had never tried before) had conspired to make her dizzy. But this time, she had fallen and was bleeding slightly from her nose.

I got some ice and we were awake for dawn. She seemed fine, but her nose had swollen. So we decided to get it checked out once we got dressed and had some coffee. We asked the concierge or desk person if they had a doctor to recommend. He directed us down to a “hospital clinic.” We figured we would zip in and get out in time for an early lunch.

Instead, we ended up spending the whole day, waiting in lines for tests and bandages. The language barrier was not making it any easier, despite what I thought was my expert high school Spanish. Never mind my poor verb conjugation, I could not even find the correct nouns. It is a wonder they did not amputate her nose or arm.

They never asked us for insurance or payment, I recall, but we had to wait for hours in lines at this particular spot. I have no idea if it was indicative of the medical service in general, but at some point we were waiting in a garage next to parked ambulances, in back of someone in a wheelchair.

But they seemed to care pretty deeply, hence this absurd battery of tests, X-rays, and consultations. They wanted to know why she fainted, and I could not explain beyond “muy cansado y bebe porto. Por favor, podemos ir?” A young doctor wanted to re-set the nose, which La probably only allowed because he was so handsome. And then he told us he wanted to place a cast on it.

“Pequeño,” he said, making a small sign with his index finger and thumb.

“He’s saying it will be a small one,” I translated.

He proceeded to place this ridiculous plaster that covered her whole nose. As if that were not bad enough, he fastened it with two strips of white adhesive tape on the top and bottom, above and below her eyes, in some facsimile of a weird tribal mask.

She was crying. Worst birthday ever. Back in the States later, our doctor friend told us there was absolutely no need for a cast. We were beaten down, hungry, and cranky when we finally decided to skip out and escape yet another line waiting for who knows what. It was almost dinner time, way past siesta. When we finally got out of there, I was able to at least tear the tape down to a slightly less glaring length. But the day, the whole trip was sunk. La felt so self-conscious walking around in this stupid mask-like apparatus, she was in a little pain, probably hungover, and really just wanted to go home and hide in bed — not the hotel, home. But she soldiered on. We have pictures of each other at all the Gaudi sites.

We ended up at a famous restaurant in the Gothic Quarter for dinner. I figured I had nothing to lose, so I tried to sneak away to the baño and whispered to the waiter to see if they had any “postres por cumpleaños.” Once he understood what I was trying to lay down, he motioned for me to follow him.

“Uno momento,” I asked, but he walked briskly as I followed him down serpentine stairways, through various dining rooms, even through a kitchen, and finally out into the street. At this point I was freaking out that La would be wondering where I was. The waiter pointed to a bakery across the street and then turned and left me there in the street.

I went with it. I ran in, though down some pesos, asked the dude to write “happy birthday Laura” on a small cake, snappy. I ran the thing back in and handed it to the waiter and hurried over to the table. I was panting. I have no idea what bullshit excuse I supplied, something about getting lost, I am sure.

I have never seen anyone look the way La did that night when the singing and guitar-strumming waiters came over with the cake. She was simultaneously pissed, embarrassed to have everyone looking at her, and only sightly appreciative that I had tried to make the lemonade out of the lemons. It was more of a shaking of the head at how hapless and graceless my attempt was at salvaging the day, coupled with her mortification. She just wanted to write off the day and slink out to dinner as under the radar as possible. I only wanted to have a little cake to mark the occasion, but somehow I ended up booking the Gypsy Kings and ended up making this big deal. I still don’t know if this ended up helping or making things worse. Actually, I am pretty sure it was worse.

But now we have one of those stories that the kids like to hear.