Cover of the Week 65 Loving You

By Bill Janovitz on 1-14-2010 in CoTW, Cover of the Week Project, Uncategorized 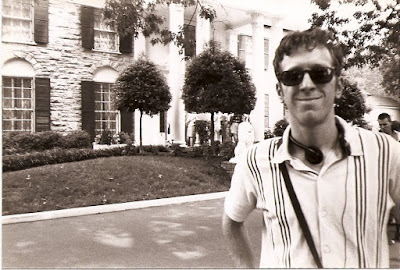 Author at a younger age at Graceland

I get the feeling that the crowd-pleasers of these covers and non-covers so far have been the songs from the not-so-distant past – alternative rock songs from Buffalo Tom and our most immediate influences or contemporaries. At least, that is what I get from the more vocal feedback. Clearly, though, this is a labor of love for me and I do it more for my own pleasure than anything else.

I would venture to guess that most people don’t have an Elvis Presley cover high on their list of requests. I think for people younger than me, those born after the mid-1960s, Elvis is almost nothing but a cartoon. His influence is too far removed. I am old enough, however, to remember Elvis alive and still sort of relevant, certainly still active. I remember seeing “Aloha Via Satellite” as a kid and wearing out the 8-track resulting soundtrack my mom had. Elvis was probably her favorite performer from the time she was an adolescent. We had numerous 45s from when she was a kid and multiple greatest hits collections.

And the musicians I loved as a kid — Zeppelin, the Stones, the Who, Beatles, Creedence — they all named Elvis as perhaps their deepest influence, along with Chuck Berry, Little Richard, etc. Elvis turned a lot of the rock & roller kids onto the blues originals.

I wrote to start of Part II of my Exile on Main St. book:

One of the records I owned when I was a kid was a 45 I inherited from my mother, who was a big Elvis Presley fan. It was “Teddy Bear” backed with “Loving You.” Since I was a kid, “Teddy Bear” obviously received a lot of spins on my portable record player. But it was really “Loving You” with which I became infatuated. Looking back, I realize how odd a song that is for a young child to focus on. Written by Brill Building legends Leiber and Stoller, it is an extremely intimate song in content, sound, and performance. It’s highly charged and romantic, with a traditional Tin Pan Alley ballad structure and melody. But in the hands of Elvis, it’s a slow-burning, ultra-sexy, slow dance number. What captured me early and often, however was the vibe of the record; the heavy, haunting sense of atmosphere. It feels like it was recorded at 3:30 AM. Presley sounds like he is slow dancing with a girl after all the guests have left a party or a club, the lights are low, overturned drinks and empty glasses and full ashtrays cover every surface. The piano is impossibly behind the beat. An upright bass pulses slowly, quietly, but insistently. The Jordanaires coo softly in the background. Elvis seems like he can barely raise his voice above a mumble and when he does, the results are striking and highly charged, spine-chilling… He sounds as if he is tipsy, drunk even, but totally in control. Presley is within the song and more romantic than sexual, but it could comfortably sit next to Marvin Gaye’s “Sexual Healing” on a compilation. While I could have had little comprehension of the content of the song at such a young age, I had an instinctive awareness of the power, the undeniable force of the feeling simmering there.

My obsession with the song has been life-long and constant. I also wrote about it for Allmusic.com

Here is a picture of my mom and dad at a party in a basement. I had never seen this specific picture until I was cleaning out my uncle’s house. But I had seen others from the same period, like the one below it, which is from my grandmother’s basement, from their engagement party. A lot of time was spent in basements in the 1950s/early ’60s. 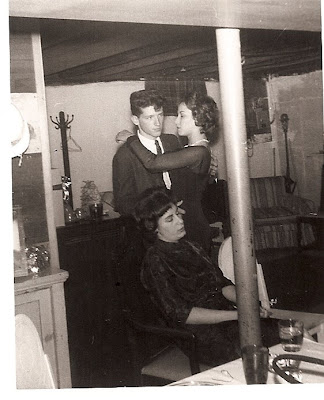 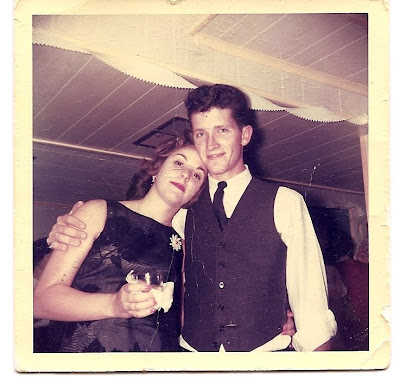 Maybe it was these pictures coupled with listening to the records that got me in this mindset. As a kid, you start putting whatever puzzle pieces together that you can find.

Mark Feeney wrote about the contemporary perception of Elvis and his legacy in the Boston Globe (Elvis at 75: Can We Ever Again See the Performer, Not The Punchline?) about a month ago. I had just been ruminating on this around that time, thinking about covering an Elvis song. I have some friends, the husband is about my age. They named their son Presley. The King would have been 75 this year. I remember my friends and I were hit pretty hard when Elvis died. We were not yet old enough to think of him as a joke. What happened to his life is tragic, the result of the same sort of insular echo-chamber bad advice that allowed Michael Jackson to spiral downward. But for those who think music started with the Clash, know this: Joe Strummer was huge on Elvis. You should definitely start with the Sun recordings, but Elvis’ greatness continued right up through the RCA years and dots many of his movie soundtracks. His Memphis LP and comeback special also display the talent that remained.

John Doe recently covered the country version of “A Fool Such As I.” But like most songs Elvis recorded, it will forever be an Elvis song for me.

So here I try for more of an impressionistic version of the vibe rather than a replication of the song “Loving You.”