Cover of the Week 43 I’m Not Like Everybody Else 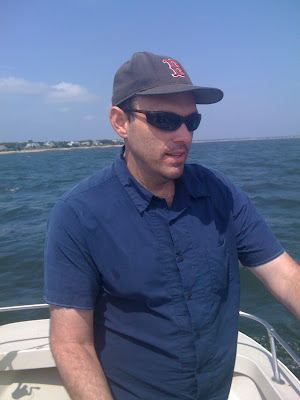 Jay Bass fishing (we threw them all back)

I got to go out on a boat a few weeks ago. One of my best friends — going back to high school days — Rich Bonanno, is a professor and during his sabbatical this year bought a small Boston Whaler and big engine. Some of you, by the way, might remember Rich from the legendary — if somewhat obscure — University of Massachusetts band, the Staties, which included Joe Pernice. No? Well, sorry for you then if you were not at that party above B&S; Glass in November 1987. Along with the third musketeer from UMass, Jay Bass[ilakis], we cruised around Centerville and Osterville via Cotuit Bay off of Cape Cod, grabbing some sandwiches [sangwiches] in Cotuit, then heading out to a deserted island to eat and drink Rolling Rocks. Finally sated, piling in some clams we dug for bait, we went out to Nantucket Sound to go fishing. We ended up laughing hysterically as we reeled in bluefish after bluefish. They were savage, biting like mad that day. I had not had a time like this since the summers of my adolescence in Huntington Bay, Long Island.

Regular readers of this blog will have noticed that I spend an inordinate amount of time recounting tales from my teenage years and would be forgiven for reacting to yet another entry with an exclamation such as “Enough already!” or “Move on, will ya, for chrissakes?” or thinking. “Here we go again, another guy hitting middle age wanting to watch skateboarders for hours to luxuriate in nostalgia of his lost youth, like the Todd character in Tom Perrotta’s Little Children.” And I would not blame them/you. I guess it is just that I am covering all these songs from my youth; if I were recording more songs from more recent days — which might be a better, or at least equally good idea — I might be reminded to recount more recent entries in the Life and Times of Bill Janovitz.

As it is, though, I can’t let go — we can’t let go — of the songs that helped define that spongy time during which we pretty much defined 90% of our adult consciousness [not sure if that is clinically psychologically proven accuracy right there, but go with me]. So indulge me this other one.

Back in those days, around the age of 14 and 15, a handful of my buddies had small boats, glorified dinghies in most cases, before the age we were allowed to drive cars, We were all more or less in walking distance to the water — the harbor, the bay, a launch here or there — so we had this freedom of movement via the boats. Of course, we had nowhere to go, or more importantly, nowhere to be. So we would just cruise the harbor and bay with fishing rods, bait, and a boombox or two — and if we were lucky, some beer and joints. We would bolt out to an island in the bay that was once an old concrete factory or something and go flying off this rope swing into the Long Island Sound. Sometimes we would even, if I recall correctly, dart across the Sound to Connecticut. But mostly we would stick fairly close to Long Island’s old Gold Coast, which was peppered with plenty of the old Gatsby-era estates, mansions not quite Newport-sized, with rolling lawns unfurling to sea walls and boathouses. We would pull in to a dock in some exotically foreign village and pick up some Hostess apple pies and RC Colas and head back into the boats to listen to the boombox crank out the Specials, Skynyrd, the Stones, the Clash, the Doors — whatever was going on the tapes we had.

One big tape/album one of those summers was One For the Road, by the Kinks. After years as an FM staple with classics from the early singles to their mid-period hits like “Lola” and “Victoria,” the Kinks had finally broken through again in America in a big way with the Low Budget LP and the live record, vaulting them back (for the first time in America, really) into arena-rock gods. I remember these tapes in constant rotation out on the boats. It was funny to be listening to these young punk rock, ska, and new wave bands back to back with all this classic rock stuff, and then hearing the older artists like the Kinks, Bowie, and the Stones appropriating some of the newer production techniques, trends, and most importantly, energy of these new bands.

We made no distinction, really, between eras. We were still discovering some of these old records at the same time we were learning about the new bands. As I say, we were sponges for anything that was new to our ears. Peter Tosh? Of course, Squeeze? Yes! “Love Me Two Times”? Why the fuck not? An American Prayer, however? Ummmmm, no thanks.

I had no problem picking out the influence of old bands on the new ones. Not many mainstream bands were as raw as the Kinks, Them, the Animals, even the Stones, when these bands were starting out. I mean, even the Sex Pistols covered the Monkees hit “(I’m Not) Your Stepping Stone.” And, in a similar E-minor vain, I always felt like “I’m Not Like Everybody Else” was as good an angry-young-man punk anthem as any, much like “We Gotta Get Out of This Place” or “Don’t Let me be Misunderstood.” In fact, I have read that Ray Davies wrote it for the Animals, who turned it down. And it certainly works for the soundtrack against those feelings we all have as we are coming into our own in those crucial and tender years.

But somehow, singing it as a guy hitting middle age [not sure how much longer I can refer to “hitting” that age before I have to just say “in his middle age”] the song still resonates and likely always will. Who wants to fall into that middle path of mediocrity, to give in to the easy suburban path or responsible parenthood and polite dinner parties. Well, OK, I guess I don’t fight it too hard anymore. There was always something magnetic in the simple comforts and I was never very anti-social. But, man, did I feel this sentiment at 14 and 15 looking around at the idiocies of the typical high school archetypes. And this song was put to great use over the closing credits of one particularly caustic episode of The Sopranos. Now there’s a middle-aged guy who would no go gracefully into the suburban night. Not like everybody else, indeed.

If you are a fan of the Kinks, you should also see this, Do It Again: One Man’s Quest to Reunite the Kinks, by a friend of mine, Geoff Edgers, and consider donating to the cause. I have seen a cut of the film and think it will be a hit.