(Non)Cover of the Week 26 Florida

By Bill Janovitz on 4-30-2009 in CoTW, Cover of the Week Project, Uncategorized 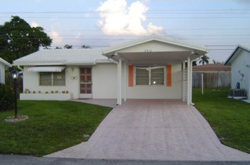 Out on Highway 41, the Tamiami, he pulled into off at a McDonald’s because the boy saw the giant colorful play structure, an arching series of caterpillar-like tubes and slides that made it a human Habitrail. The 4-year-old boy inquired about the “playground at Mickeh Donalz,” as they slowed for the red light, and negotiations with the mother started. He fancied himself as more spontaneous and whimsical than most fathers settling into middle age — comfortably or not — so he decided and then quickly announced, “why not” and pulled into the lot, listing, as he negotiated the other cars, the requisite details of this hour’s parent-child deal being hammered out and finalized as he pulled into a faintly diagonally striped non-spot near the entrance and the second drive-thru window; No burgers or fries would be purchased; some drinks OK, the subsequent specifics would be laid out by their mother. These kids are pretty much as happy as can be 8 hours a day in their grandparents pool, with a short break at the McDonald’s playground. Sure, Disney World is more fun, but that much more fun? Like, hundreds of dollars more?

After a 30-minute period during which the parents sat at a built-in table on the exterior of the shabby stucco pre-fab building in need of a new paint job, enjoying their gamboling children who were generally very well behaved and were enjoying this impromptu triumph of the will, they all lumbered back through the dining room itself, past the scattered diners, mostly elderly couples sipping coffee and having a snack or early dinner. Passing the final couple before the registers and, then, the exit, he looked down to the woman who was positively beaming with a genuine smile as the children passed before her, her eyes coming up to meet his as he smiled back, feeling a vague warm acceptance and resignation in the context of this whole trip to Florida. Each subsequent visit made him, naturally, reflect more on mortality, cycle of life and the human condition.

Out again from the air conditioning into the pleasant Florida heat coming from the midday sun and from the blacktop below. After considering potential lawsuits that might arise from possible mishaps over on the play structure — after all, people sue over spilling hot cups of coffee on their own genital regions — it did not take long for his imagination to run away from him. Here, in this balmy parking lot as cars speed by on a 6-lane highway flanked by never-ending plazas of Publix Supermarkets, CVS Pharmacies, strip-mall taverns and thrift shops and bric-a-brac shops and Mexican and Olive Gardens restaurants. In this failing economy, with another swine flu outbreak, wars and global warming, it was not a far stretch to envision pretty much the unraveling of civilization as we know it, starting maybe with some perceived slight or misunderstanding and escalating into a crisis as in a novel by Russell Banks, perhaps such a spark getting picked up in the wind and burning faster and closer to threatening neighborhoods like the constantly burning brush fires miles away that were at this moment filling the air with the acrid smell of smoke all the way to the coast, reminding one of the “white noise” of constant threats to illusory peace and prosperity in Don DeLillo novels. Or maybe like a Cormac McCarthy observation of society starting to come undone when people stop being polite. It would not take much more than 30 seconds to feel he could easily reach out and rip back the cheap facade of this tenuous civilization, as flimsy as this stucco McDonald’s or the boarded-up amorphous-shaped commercial place across the street, a mauve-colored stucco place that was most likely another fast food joint or gas station in its better days. This did not take some sort of Matrix-level complicated method to catch a glimpse of some alternate reality; it was simpler than that. He thought that most of what we know and see and depend on is simply too flimsy and in the hands of people no more mentally developed than children. It could all be pushed over with one, maybe two hands.

His reverie started by remembering he was parked in that “illegal” spot. Was there someone to enforce this fast-food legal structure? It was not a handicap spot. Was there some private police force that was going to jump out at him. He had a vision of a flabby man in an ill-fitting manager’s uniform shirt and baseball cap who could have been 20 or 40 was chatting with a tow truck operator as the rig was being hooked up to his father’s Buick Regal.

“What are you doing?” he would ask rhetorically. “This is a mistake. This is our car.”

And it would unravel from there, in front of his wife and children. A fight to the death. Fighting a tow truck operator and a sweaty, greasy McDonalds manager on the hot blacktop and likely getting his ass kicked. He was not able to predict how he would behave in this situation. Would he find the humor in it, as Richard Ford did in Independence Day, when his hero was confronted by a teenage private security “officer” in his ex-wife’s new gated community? Or would he go off it some sort of base-level self-protective violent episode as one of McCarthy’s characters might? Most likely, he would throw up his hands and find some melancholy jokiness in it, pissed off, sure, that he had to explain to his father what had happened and deal with his still-caustic asides as he, once again, had to be rescued by the grown-up, even if he himself was now 42 and his father in his upper 60s.

I had this little daydream in the span of about 20 seconds during our vacation to Naples, Forida this past week. The city has a ritzy old part with a vital downtown center near the ocean and extreme amounts of money on display in $25 million beachfront compounds, and Bentleys and Ferraris everywhere you turn. Then one crosses a bridge and drives through strip-mall land peppered with gated golf communities for another 30 or 40 miles north toward Ft. Myers and also southeast, until one hits the Everglades. These communities vary slightly in their level of luxury, filled with retirees from all over the US and Europe. The real money may be out on the coast, but many of these people in the other highway-side communities worked hard, saved their good chunks of money, and pulled most of their nest egg out of the market before it went belly up.

My folks live in one such place and we are thankful they do. First of all and most importantly, they are extremely happy. It is not where I could see myself when I am that age, but we enjoy seeing them and luxuriate in their largess at having us share their great house, with a pool and a lanai, on a pond with a gator lurking in eye shot. They can’t get enough of the kids at this age. I don’t golf, as my dad does, but if I did, it would be heavenly. Our kids can spend all day in the pool, until we drag them out for lunch at a sidewalk cafe and a few hours at the beach. It is a really nice cheap vacation for us. It is not a completely soulless development; the houses are fairly modest, close together and lushly landscaped with tropical fauna, lending the place a certain terra firma and neighborhood permanence. The neighbors all seem genuinely happy and satisfied, they are all out chatting, taking walks, riding bikes, waving to each other. At night, they might drive the 20 minutes or so into downtown Naples to have a meal at some of the top-notch restaurants or, closer to home, drive a minute down to the clubhouse restaurant or bar & grill. It’s a pretty great way to go out. By the look at the bar scene at one of these restaurants, with all the expensive but futile plastic surgery on display by those trying to pick each other up, some were not going gracefully, but go we all must.

And this is what retirement is. When my friend’s parents told the adult children that they were retiring to Florida, the father did not cite any of the usual — golf, beach, pool, or even weather; he bluntly announced, “we’re goin’ down there to die.” And that is, in a nutshell, what my song “Florida” is about. I grew up going to visit my grandparents in the decidedly less-swanky retirement community called — I kid you not — Leisureville, in Pompano Beach. These were little cinder block houses with 2 or 3 bedrooms, screened porches, a community pool and club house built for the same families that post-war suburbs like Levittown were, only now they were nearing retirement. My grandfather was one of those returning G.I.’s, who retired fairly early after working for the New York City Department of Sanitation. When we visited, though it was a far more modest version of the situation my parents have, we were as much in heaven as our kids are when they visit. The whole deal– grandparents, sun, pool, family togetherness, vacation time in general.

My grandfather died in 1986 and my grandmother was never the same. Her mood darkened. He was everything, her whole world. She never even learned to drive. She eventually sold her house in New York. Her body was very strong and she was in great physical health, but as the years went on, her mind started to go, and then she started to lose sight. Along the lines, she had to sell the house in Leisureville and my parents and mother’s brother moved her close to my uncle, who looked after her final years. She lived along time. She’s buried in the cemetery directly across the street from the big yellow cursive Leisureville sign at the development’s entrance.

We left my parents Tuesday. Dad is recovering from a quadruple bypass. Mom successfully battled cancer last year. The kids sobbed as we left them. And the pool, and vacation time, and family togetherness. We’re very conscious of time passing and the fact that the kids won’t likely always cherish this sort of thing.

This song, from my solo record with Crown Victoria Fireworks on TV, is sort of my poor-man’s “Veronica.” It’s about a few things, but is focused on my grandmother. At the time that I wrote it, at the end of her life, it felt appropriate to attack the song as I did in that original recording, i.e. thrashing and raging away sort of helplessly, careening out of control, screeching at the very limits of my vocal range. In reflection of this recent trip, I am picking it as one of my own to reinterpret for a Cover of the Week, giving it a more spacious and quiet reading. That opening riff actually reminds me of one of Buffalo Tom’s first, if not the first cover we recorded, a song called “Blue” by the Rain Parade.