Home > CoTW > Cover of the Week 13 Boots of Spanish Leather

Cover of the Week 13 Boots of Spanish Leather

By Bill Janovitz on 1-25-2009 in CoTW, Cover of the Week Project, Uncategorized 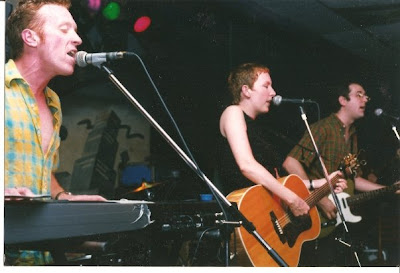 Bill, Chris Toppin and Mike Leahy of the Bathing Beauties some time in the mid-1990s at TT’s

I have said it before and I will say it again: Chris Toppin should be world famous, I mean more world famous than she already is. Aside from being a lovely person – let’s face it, there are plenty of those who should not necessarily be world famous – she has a beautiful voice and is a great, emotionally deep singer, a soulful singer, in other words, with a great texture and versatility to her voice.

Top, as her friends know her, has sung on my three solo records as well as some Buffalo Tom numbers. Additionally, we had a band that never took full flight, a band that perhaps was never meant to take full flight, the Bathing Beauties. I have some tracks that were never released from that band, and as soon as I get them into files I will post some here. In the meantime, you can enjoy this cover of the genius early Bob Dylan song “Boots of Spanish Leather.” And you can sample the Show People, a record of duets between Top and me, about half of which consists of Beauties tracks that never saw the light of the day, and some that were written just by and for the two of us. I will include one of those songs below, but you can also buy the CD here or download it here.

I could do a whole year of weekly Dylan covers, Neil Young covers, Stones, Beatles, Van Morrison, Elvis Costello, and Waits’ covers. It would likely not be as interesting, though. But there are likely to be multiples from each of these artists in this space over the course of 2009.

My review of the song from years back, on allmusic.com.

On the Show People record, Top and I trade off lead vocals and often sing harmonies throughout a song. This is one where I take the lead. It was written with the whole group — Dean Fisher, Phil Aiken, Paul Kolderie, and Mike Leahy.