Home > CoTW > Cover of the Week 7 Slip Slidin’ Away

Cover of the Week 7 Slip Slidin’ Away

By Bill Janovitz on 12-22-2008 in CoTW, Cover of the Week Project, Uncategorized

Something I read in a magazine a few days ago set me off on one of those Google-search-digression nights and before I knew it was on to a dozen other things that tangentially looped off that original query. The thing that I had read in the magazine was the first third of a poem by a writer named Bob Hicok, who, according to his mini-bio in the New Yorker, has written five books of poetry. One line, from “As I Was Saying” is describing some twin children:

…two of everything the same, as if their parents
knew the odds of needing a spare.

It is a funny little line — literally, at least on the surface, but very affecting from the perspective of a parent reading it, the hopeless fragility of life. The narrator tosses it off with a deceivingly wry and casual tone, like he’s cracking wise. But he knows how deep the line runs.

I had only gotten that far into the poem when I was set off on my search. The preceding line is what actually triggered me:

When I was a kid, a neighbor man
had a few and tied a cherry bomb to a pigeon,
it flew furiously until kaboom…”

This is the sort of poem I tried to write when I was boring my creative writing professors to tears as an undergraduate. I was far more artless in my attempts to capture the odd characters and situations that cross everyone’s path as they are growing up, perplexingly unique scenes that seem they must be assigned some sort of significance — meaning that is elusive but somehow seems to hint at some larger overarching essence. The memories fall away into the mind’s recess, aided and abetted by all the undergrad, post-grad, pre-dad, and post-sad chemical abuse until they bob back up to the surface unexpectedly decades later.

When I read the line about the pigeon bomber, it jogged a memory of this old guy who lived across the street from us when we were kids in the ’70s, living near Huntington Harbor in New York. The fellow was rarely seen around the neighborhood, just an old guy, sort of broad and hunched over, a few greasy strands of hair combed back late-Bukowski-style. He drove some big-ass ’70s sedan as many older men did – an Olds or a Caddy. He wasn’t a mean guy, didn’t object to us playing whiffle ball in his level backyard. Nor was he a shut-in; we saw him coming and going. He had a wife, kids grown and left. Never had company, as far as I remember.

One day, when I was coming back from school, the bus got to the bottom of our street. It was blocked off by a bunch of police cars. They told us the whole street and surrounding blocks had been evacuated. I have no recollection about how I ended up getting from the bus to a friend’s house, but it was the ’70s; the bus driver probably just kicked us out of the bus right there at the end of the street and we walked.

We found out that the reason behind this operation was that Mr. Appletree (not his real name but pretty close for these purposes) had some barrels of nitroglycerin in his basement and the state bomb squad had been called in to remove them. There had been a weapons and explosives amnesty period called by the Suffolk County police and Mr. A. took the opportunity to confess that he had somehow ended up with drums of nitro after WWII and had stored them in his basement for 30-odd years. They could have blown up the block at any point during the intervening decades. And we lived directly across the street.

I remember getting back home and sort of hiding behind a neighbor’s big wood-paneled station wagon and watching the last of the police, rescue, and bomb squad armored vehicles finishing up after the main cache had been – slowly – rolled down the street in a police escort of dozens of cars.

I tried to track down remnants of the story online but could not find any trace. I’ve had this childhood memory, with an old Polaroid-sepia tint, verified by my parents. It happened.

Edit: There is a reason the memory has a Polaroid-sepia tint; my sister dug this old picture up of the scene and on the date of the crime: 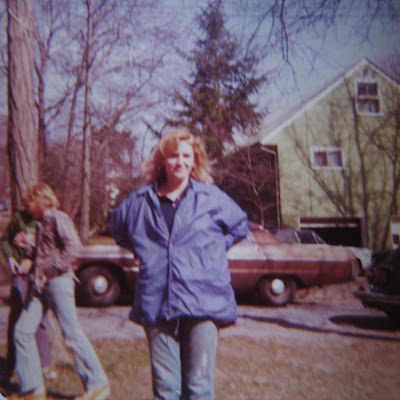 The woman is my mother’s friend from the street, a woman named Cookie. Her daughter was the first girl I kissed. The second girl? My wife, of course. And it seems my memory is a bit off regarding the car; it is not a wood-paneled wagon. It looks like an old Valiant to me. But that green house, that’s the one.

During my online search for the story, though, all I ended up doing is finding my old house – which we left in 1979 for another not so far away – on Google Maps. That led to looking up others we have lived in and then, street-level images of my grandparents’ houses closer in to the city. Suddenly I was directing my computer screen through routes I would take on my bike when I was a kid through a neighborhood I have not been to since 1986, seeing the same houses, perhaps a little updated but fully recognizable, rounding corners onto the boulevard past what was the IGA market, the bike store, the Chinese restaurant and the five-and-dime — honestly, there was a five-and-dime. I still remember the smell of the place. There is still a place a lot like it near me in Arlington. Cheap plastic toys, rubber chickens, plastic dinosaurs, cap guns, paddle ball…

And then just guiding the view back to my grandparents’ old house, staring at the small brick place, alongside hundreds of others separated only by narrow driveways, on grid-like blocks, remembering those acutely idyllic pre-adolescent days, wondering who lives in these places now.

I remembered Hicok’s poem and returned to it. Near the end, he continues,

…So I’ll die and someone
will have to deal with what’s left, the body,
the shoes, the socks. The last person on Earth
will just be dead: not buried or mourned
or missed. As with kites, I cut the string
when they’re way up, because who would want to come back.
So Somewhere are all these kites, as somewhere
are all these pictures in frames from the camps
and the bows from the hair, and the hair itself

Well, you ask, how does this all relate to the cover of the week? Of course, there are many songs about such topics as these. If we are talking in a general sense about the natural flow of life, i.e. that it all ends in death (oh, this mortal coil!), there have been many great works in the pop music canon. There is a three-LP set (that’s how we used to quantify music recordings) that is pretty much all about these concerns, the masterful All Things Must Pass. And I am not sure any one song in this genre is more sublime than Tom Waits’ “Take it With Me.”

But there are far more lame songs. When I was ruminating about such mid-life concerns in an inappropriate forum for such gravity, predictably coming to the conclusion that we should all live it up, a friend of mine mockingly compared my sentiment to that classic, “Dust in the Wind,” from one of those geographically named bands. If, with a gun to my head, I had to name a band after a place, Kansas would not likely be the first on the list. Clearly Buffalo was. Buffalo trumps Kansas any day. By the way, there was/is a German band who named themselves after Chris Colbourn’s parents’ address in Medfield, MA, which is how it was printed on our first record. The band, Medfield, MA (with “MA pronounced phonetically, like “medfieldmuh”) went on to greater achievement in Germany, is how the legend goes. Of course the Stones went on to greater heights than Muddy Waters, upon whose song they titled themselves. Now, I am not comparing us to Muddy or the Germans to the Stones. It is merely that I had some Flexeril for my back spasms (speaking of mortal coils and all) and I’m feeling pretty good right now. I am also a poor self-editor, as you have increasingly and painfully become aware.

I have decided to do Paul Simon’s artful “Slip Slidin’ Away” this week. I remember playing it out once, with Chris Toppin, I think. Someone also requested here in the comments section. It is a song that I have always loved. But now some lines seem more acute as I have become a parent. The song came out as a single in 1977, a year or two after the nitro incident. I think I changed the line “we think we’re gliding down the highway when in fact we’re slip sliding away” to “…speeding down the highway…” by accident. But as we know, there are no accidents. 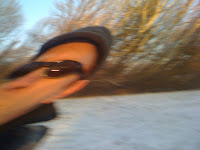 Happy holidays to you all!