Cover of the Week 3 One Step up

By Bill Janovitz on 12-04-2008 in CoTW, Cover of the Week Project, Uncategorized

Okay, here is the third installment of Cover of the Week. My voice was a bit hoarse from Buff Tom practice so I tried a number from the Boss. A great song that has too much ’80s goop on it on the record.

If you want to donate to a charity due to inspiration from this little project, be it because of a specific request or just in general, I have two in mind. One is the Foundation to Be Named Later. Many of you from around Boston may be familiar with the organization, started by Paul and Theo Epstein and the beneficiary of the Hot Stove Cool Music event. The other is the Global Fund of the UN, as inspired by the RED Campaign. I have a friend who is one of the main folks that run RED (along with Bono and Bobby Shriver), which raises money to fight AIDS in Africa through partnerships with private enterprise. RED participants include Apple, Starbucks, and Gap and purchases of certain RED products result in donations to the Global Fund. The RED Campaign has also started a promising new venture called (RED)WIRE, which is a new subscription-based delivery of music, film clips, all sorts of stuff from big successful artists as well as newer acts…it is explained better here: (RED)WIRE.

I have no formal relationship with either organization.

Another lame Photo Booth shot. I think this will have to be the end of the self-portraits. I’m gonna gave to come up with something more interesting for a visual element. But extra credit goes to the first person to recognize the painting on the wall. 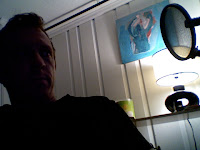