By Bill Janovitz on 1-04-2009 in CoTW, Cover of the Week Project, Uncategorized

I am the oldest of five siblings. Many of you who come out and see the live shows around Boston have seen, heard, met, become friends with, engaged in fisticuffs with, are owed money by, bought watches from, and/or have had your significant others stolen by one or more of my three brothers (a sister is prudently distanced and safely ensconced in a well-appointed home in Georgia). We are all very different. Clearly I am the smart and handsome one. Not sure where that leaves the others, but they do have youth slightly more on their side.

Being the oldest, my brothers obviously and unwisely looked to me for steady and sage leadership, saw me pick up the guitar, and somehow thought that would be a good idea as well. I’m not saying they would not have started on the guitar if I had never done so. But they saw me doing it and though, “well, Bill is not too good at it. I can do it too and do it way better.”

We had all been playing guitar in various bands for years before we finally started lugging out the guitars for Christmas sing-alongs. It’s not like we are introverted. I mean, none of us are anywhere near what you would describe that way. On the other hand, the ability to shame the others, especially in the presence of outsiders, is a finely honed talent that we have all developed to varying degrees. As a result, there is a slight – some would say “healthy” — reluctance that counteracts the burning need to perform for and gain the approval of others. We actually see each other very, very…very often and don’t automatically break out the guitars and doing tunes. For one thing, the kids wouldn’t stand it for too long. Likewise the wives/girlfriends. The only person, in fact, who is at all encouraging, is our mother. Unless Oprah is on.

Nevertheless, the need to perform is an overwhelming one and Christmas is when all hell breaks loose. This year, however, my brother, Scott, announced he would not be participating. Scott grew a beard this year, so he is now known as Country Scott. I think he wants to give up the rowhouse in Somerville for his country estate or log cabin and get back to he land and release his version of Ram or All Things Must Pass. I’m not sure what my mother said to him, but Oprah was not on and in no time he ended up joining the rest of us betraying no sense of self-respect, belting out the songs with vim and vigor and, along with the rest of us, embarrassing the women and children.

But he is talented. Has a lovely boyish tenor behind that gruff, manly facial hair. It was actually for a Christmas show at the Lizard Lounge, when three of us – Paul, Scott, and I, as well as an opening set from Little Tommy – put together a couple of sets of Christmas songs and songs by famous brother acts (Allmans, Beach Boys, Kinks, Bee Gees, Jackson 5, etc.) that included some songs by the Everly Brothers. I think Scott and I sound nice harmonizing on Everly and Louvin Brothers’ tunes. So here is one we did for that show a few years back, “Like Strangers” written by Boudleaux and Felice Bryant and performed by the Everly Brothers.

For all of this Cover of the Week project being about a stripped down set-up in the basement, I went a little Phil Spector-Walker Brothers-Sigur Ros-Ocean Rain-Nick Cave-Space Oddity-Joe Meek on this production. I suggest a pair of headphones and your favorite sedative. Some shit happens in this.

Country Scott sings, albeit at the Lizard Lounge. 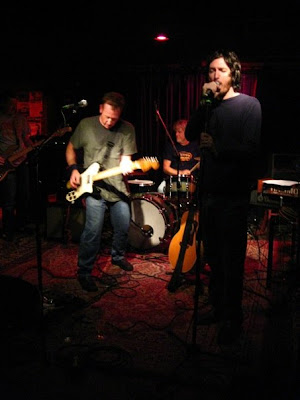