Cover of the Week 4 Dreaming/’Til the Next Goodbye

By Bill Janovitz on 12-09-2008 in CoTW, Cover of the Week Project, Uncategorized

When I was maybe 19, just into college, a friend told me all about these cool new kids she had met in her apartment complex in Charlestown (a neighborhood of Boston). Or maybe she met them at a party or something. But they were students at Berklee College of Music and in this great band called the Blake Babies. She gave me their tape and I recall loving the fresh indie DIY pop with a little aggressive edge. The guitar player John Strohm played in an early version of the Lemonheads and lent the edge. Freda Love played drums and a very groovy (literally) style, very relaxed in the pocket. And Juliana Hatfield sang and played bass.

Like most indie rock/post-punk boys, I was enthralled with her voice, lyrics, and melodies. It is not by accident that they named one of their collections Innocence & Experience, another allusion William Blake, I assume.

Of course, most of you have long heard of the Blakes and Juliana. Buffalo Tom went on to play a ton of local shows with them starting out, and the toured the US early on in both of our careers. Then Juliana and I traded off opening solo for different shows over the years – me opening solo for her and her band about 6 years ago or so in the midwest and out on the west coast and her opening solo for BT most recently.

It is during those most recent dates, in L.A. and in San Francisco in 2007, that Juliana joined our mutual hero, Paul Westerberg in a “Buffalo Tom gets snubbed by a guest vocalist to help with the Blondie song, ‘Dreaming’ during the encore” sort of infamy.

Many of you have heard me tell this chilling tale. Perhaps some of you were even present during that dark night in Toronto back in 1988. Buffalo Tom — why, we were just young lads, peach fuzz on our chins, fresh from wearing out our Replacements and Hüsker Dü records, when we walked into Lee’s Palace. At some point, Chris Colbourn came up to me and nervously told me Paul Westerberg was up at the bar. Chris chatted with him a bit about the Replacements, told him we were fans (obviously), and asked him if he would join us for a song. I recall that he was non-committal about it. Anyway, we played our set. I was pretty excited to have Paul W. there, even if by chance he had to split early.

Well, when it came time for an encore (it did happen occasionally), I addressed a vague spot out in the center of the gathered throng, saying “I think we might have a special guest,” or words to that affect. I paused, scanning the audience. Nary an ex-Replacement to be seen. But I could tell that some in the audience knew he was there (or had been there). Some of them were nodding encouragingly to me, wide-eyed. I might have invited him once more. But then, shrugging my shoulders, I said something like, “Oh well, maybe if we start the song, if he’s still here he can join us.” So we started the song, “Dreaming,” a song I always loved, was easy to play, and I could see being in Paul’s wheelhouse, having seen him sing a ton of covers over the years.

We got all the way through the song without anyone joining us. We assumed he had just taken off. But we had a good time that night. Those were the sleeping-on-floors, driving-the-big blue van, hiding-the-contraband days. Now we have gorgeous supermodel groupies chauffeur us in Rolls Royce limos (hybrids) to the local Four Seasons where we ingest same contraband directly off of the various body parts of the supermodels as you’d expect.

Months or even a year later in London, we had our actual groupie (yes, there was one and only one and if you have seen Mel in Flight of the Conchords, you should know we have a lawsuit against the show for the lifting of that particular element from our career) approach us with something in her hand. She said, “Oh, someone wanted me to give you this note.” She handed it to me and I unfolded it. It read, “Dear Buffalo Tom, Forgive me for ‘Dreaming.’ Paul Westerberg.”

It seems she was also one of his groupies and the subject of BT must have come up. He told her to give us this note. I forget the details but I believe he was still at Lee’s Palace when we played the song after all, as opposed to someone just telling him about it afterward. (G — if you’re still out there and reading this, sorry I refer to you as “a groupie.” If you have another suggestion for a more accurate/politically correct term, let us know. It has been many, many years.)

I know that Juliana holds Mr. Westerberg in similarly high regard. Perhaps this is the reason she reneged on her promise to come out and do “Dreaming” with us in L.A. (or San Francisco, I forget which night came first) even though we actually went over the song with her in soundcheck; it must have been an homage to him. Or maybe she just took a look at us stumbling around the stage in various stages of lubricity and figured she best hightail it outta there before she got dragged down along with us. Either way, it does not explain the second night in a row that she decided against it. Well, one gets one’s feelings hurt when such things happen.

Or maybe the damned song is just cursed for us. But those that were in El Rey that night in L.A. did get to see the magnanimous Kay Hanley join us for the song without having any idea she was coming up to sing. What a sport! And she saved the show, as far as it was able to be salvaged.

A handful of you have requested it. You know the request rule. So here it is, along with a little medley into a Stones song. All things seem to end up there in the Stones cul-de-sac for me. Somehow I have managed to pay respect to Paul W. twice in the 2 or 3 weeks of these covers. Sit back, it is epic.

And, as a wise man once said, “sorry about ‘Dreaming.'”

Janovitz, Bill — Guitar, piano, vocals. I didn’t want you to think it was someone that knows how to play piano for real mangling the part. 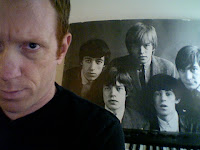 My allmusic.com review of Till The Next Goodbye (from way back).

Here is me if had been in the early Stones. Clearly, I’m running out of Photo Booth ideas.